When i filed for a divorce in 1984 several years later i found to my surprise that there were a couple of things that weren’t taken care of. I told a relative of mine I was having a problem with my ex, and needed to see a lawyer. He told me he had a great lawyer by the name of Steve Hosford. This was in 1997; I went to him and hired him. What he did for me on my Government pension was great. I have to say that he really works hard for you, has a wonderful staff and wife, and is always pleasant and kind, through the years I have sent people, which I have worked with, to Steve. They all have been very satisfied.
Anytime I needed a question or guidance I can call Steve and he suggest to me what to do. About two years ago, I needed an immigration lawyer here in Orange County for a friend. He gave me the name and we later hired him. We were very pleased on how everything worked out.
I called Steve about three weeks ago here in Orange County to see about getting a consultation for my son In a divorce matter. I was not aware that he had finally moved to San Luis Obispo. The receptionist that answered remembered me and put me through to Steve. Like always, he was there to help guide me through. He gave me a lawyer down here to have my son go to. My son was very pleased with his lawyer and hired her immediately.
Through the twenty-one years of !mowing Steve and his wife they have both been very helpful, kind, and will always be there for you.
Thank you Steve for being a great friend and a wonderful lawyer. 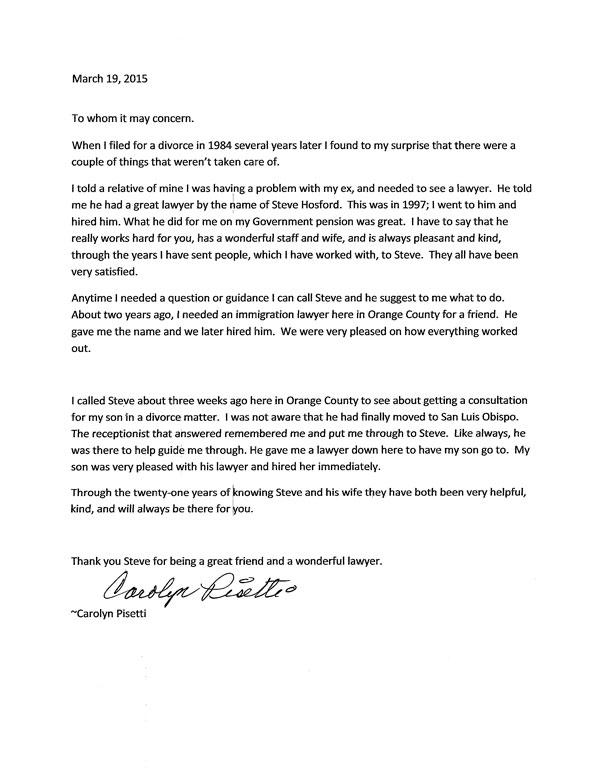